As people-moving events become more restricted by the minute due to the Coronavirus, I am thankful most of my daily routine revolves around spending time in my studio...I am lucky!

I ran into an issue with the stitch regulator way back before Christmas on my Nolting Fun Quilter midarm. I overcame the issue by turning off the stitch regulator. After quilting two tops I finally got around to calling Nolting during hours they were open and I wasn't sleeping. (A major downside to living in Alaska.) Maybe the Daylight Savings time switch is what had be up earlier than usual so I got that call made! (The Daylight Savings switches always shakes me up twice a year for at least a week!)

It was a great relief...and a little bit embarrassing to figure out the problem is dirt. This simple little wheel pictured below needs to be cleaned. I can even see some tiny sparkles of glitter on it. 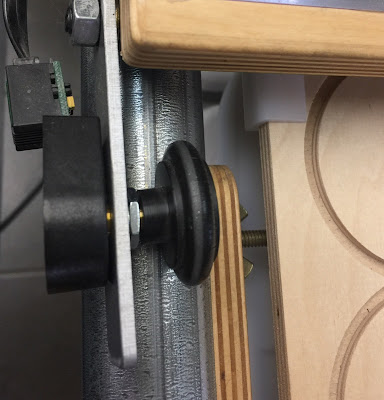 I do tend to use parts of my quilting frame as extra table space when I am not quilting. I'm sure that has a lot to do with that dirty wheel! 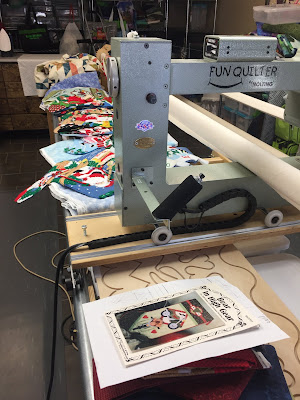 I'm sharing that bit of knowledge in the hopes it might help someone resolve such a simple issue. 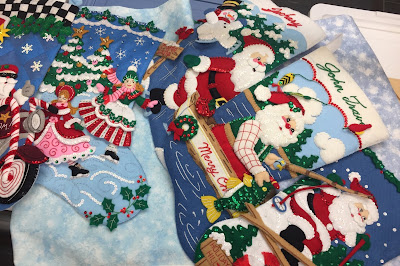 The first three days of this week were spent taking down all my Christmas decorations. I have never kept my stuff up until March...but I think I will do it again. I still hate how bare everything looks without all the lights and garland.

And...it turns out a couple of large drywall cracks redeveloped around two of  the picture windows in our great room. We had several large aftershocks this winter and we can expect another year of them. The garland I hang around those picture windows covered those big cracks very nicely. On the up side...I haven't found any other cracks re-emerging anywhere else in the house.

I just want to make a brief mention about how anxious I felt this winter. I think it started with a major septic tank issue that lasted for two months. Then several good aftershocks and the anniversary of the big earthquake on Nov. 30th. We had just as many dark hours as we ever do this winter but I just didn't power through it like I usually do. We did do some traveling to warmer, sunny climates and that definitely helped. It's the first time I've struggled so much with our winter months...hoping next winter I am back to normal and getting lots of quilting done.

On to fun stuff.

With three trips out of Alaska I managed to get three cross stitch ornaments done. These are all from Mill Hill and are Jim Shore designs. These can be challenging little projects with lots of color changes in small areas. I have one Santa in the series left to make.

I'm definitely behind on my Bucilla projects for the year. I'm getting back into that grove. I'm about halfway through this stocking. 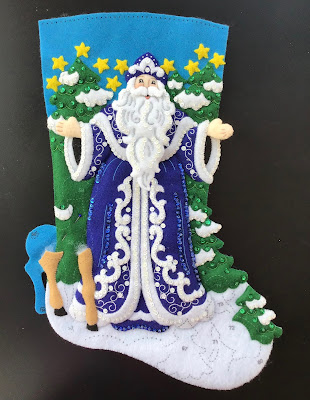 I did take a simple Bucilla kit on a trip and got it started. Like quilting...it's always nice to have an easier project to pull out if lots of fancy embroidery work gets you bogged down on another project. 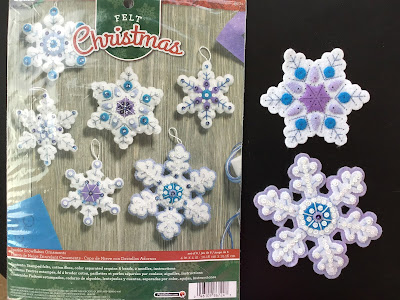 I am trying to stay on-task with the quilted stocking I started. I have the front and back sections basted for some hand quilting. I was planning to start the quilting tomorrow at a quilting session that meets at a senior center but with the Coronavirus warnings the session was cancelled. Totally understandable since it is held at a senior center with varying levels of health concerns for residents without new stuff hitting them. 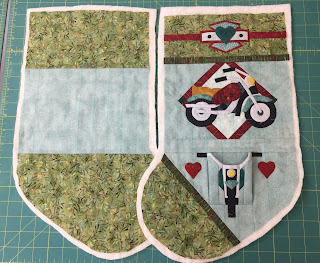 And finally...a little look at life in Alaska 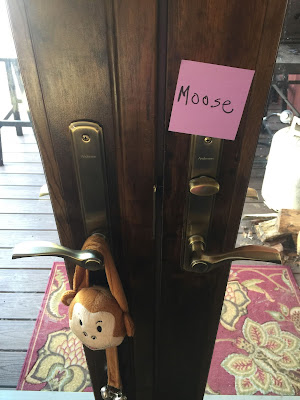 My husband had called to tell me minutes after he left the house that a moose was laying in our yard, right by the driveway...but a few minutes later I got distracted and when the dogs rang their monkey bells on the deck door I let them outside. 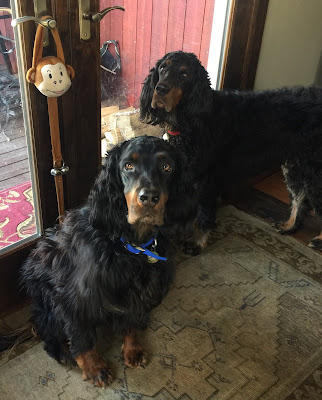 They ran around the corner of the house and found this guy. 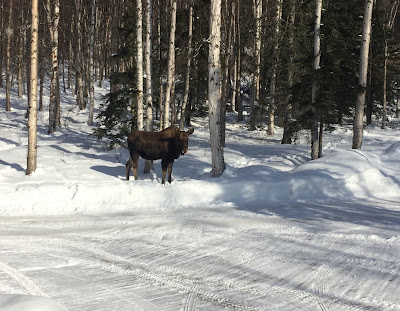 There was another moose in the woods behind him.

There was a lot of barking and after much screaming on my part, both dogs finally came back in the house. I immediately wrote the pink sticky note so I wouldn't make that mistake again!

This same moose was in the yard yesterday evening and my male dog, Logan, tried to chase the moose through snow that is two feet deep. The moose charged him and since the moose has longer legs he was making ground on Logan when my dog finally cleared the deep snow and hit the driveway.

Later this afternoon, both moose left for other parts of the mountain. They will probably be back all too soon.
Posted by Debbie at 6:16 PM

must be very interesting to watch the dogs and the moose - glad it wasn't a bear - which do the dogs need to be more fearful of the moose or the bear? of course in the spring when the snow is melting and the bears come back the dogs don't have to run through the snow so that makes a big difference I assume.
I hope you won't receive more damage to your home from after shocks! that must be a bit scary after having that one last year.
I don't think I could do the dark in the winter for so long - I'm more an outside then inside person and need my sunlight so does my daughter - she wouldn't be able to handle the dark like that I know if makes depression worse.

Don't be too embarrassed by the dirty wheel on your stitch regulator. When I first got my long arm, the stitch regulator didn't seem to work. Only after getting a friend to take a look at it, did we realize that the wheel just needed a little push downward to make contact with the track! Boy, did I feel dumb!
Your Jim Shore ornaments are absolutely adorable! So much detail in them!

I understand about your 'anxiety'. I think with all you've had to endure this past year, added to the current frenzy over the Plague and I think anyone would have a bit of angst. Thank goodness, as crafters, we are prepared for self-isolation - after all, we've been collecting crafting items for just this kind of instance! Be safe, my faraway friend.

Carole @ From My Carolina Home said...

I know what you mean about those wheels, once I had a thread wrapped around one of the encoder wheels and couldn't see it. Thankfully my contact at the longarm hotline had the answer quick. Your moose are so fun to see, we have deer here and black bears occasionally.

Sorry to hear that aftershocks are still happening. Hopefully things are coming to an end and there will not be anymore damage to your home
I love seeing pictures of your dogs.