We are so fortunate in the Anchorage area to have a quilt shop, Seams Like Home, that brings national quilt teachers up to Alaska. In the past, I have been too late to get into a class but I have made a bigger effort to sign up the day the class is announced.  Angela Walters last weekend and this weekend Cynthia England.

Here is a terrible photo of Cynthia's quilt that won the Houston Quilt show last fall. It is so incredible. I have seen it in a couple of quilting magazines so hopefully you have seen a better photo of this quilt. Or maybe you saw it at Houston. I could look at it forever. 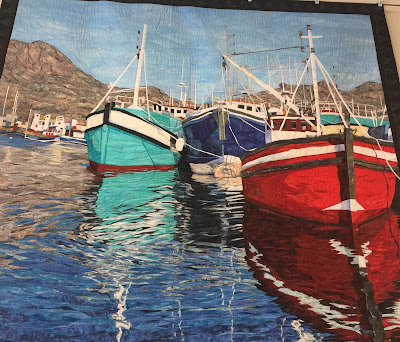 In her class yesterday, we  had the option of making one of her kits.... 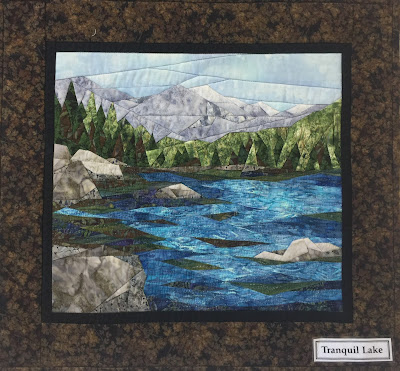 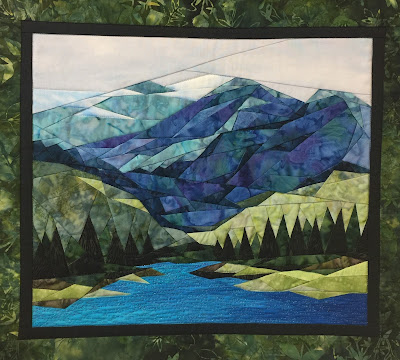 I picked option 2, Smokey Mountains. Turns out it is just a little easier than Tranquil Lake. I chose wisely!

The first half of the class was construction. This is how far I got. I had a little help, as Cynthia actually used my kit to show some of the piecing. She is a Bernina owner also, so I think she chose me because I had a machine she was comfortable using. 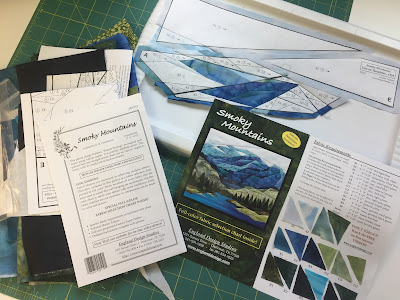 I watched her construction videos before class and it really help me to get this technique down quickly. Another helpful bit of advice was to use this particular iron... 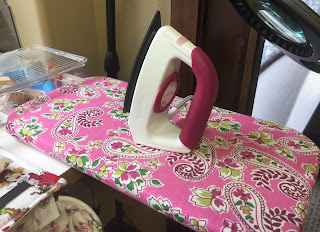 which I bought from the quilt shop at the class. I have a Rowenta travel iron but it is a power hog...uses 1,000 watts which leads to popped fuses when several quilters are using them in one space. This little iron only uses 80 watts and is just perfect. I love it. I also already had the clamp on ironing board that a local quilter designed. You have to press every little seam as you stitch with this technique so very important to have an iron and board so handy.

The second half of the class was all about how to take a picture and create a quilt design. I bought her book about this technique 20 years ago...hands on with the author makes a huge difference in understanding the little mistakes that most people make.

I now have so many pictures in my head I want to turn into a quilt...I need to stop sleeping. I don't know how else to find time for everything.

I didn't get a bear picture yesterday...though we did have black bear in the yard. I was busy cooking dinner so missed seeing him but my husband did see it as we knew some animal was making the dogs crazy.

There is a grizzly sow with two cubs in our neighborhood right now...I've only seen other peoples' pictures of her...expecting her to visit us as sometime...though it might be while we are asleep.

I did see this moose in our yard last night. Again...the dogs were doing their crazy barking for animal sightings. This moose was running and I waited for a bit to see if a bear was going to be following it but didn't see it. Dog barking doesn't usually get a moose running. 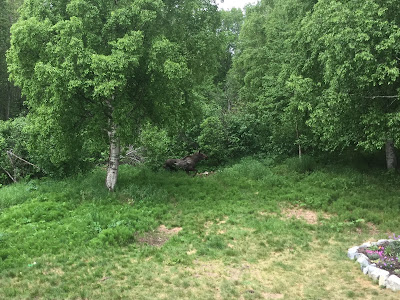 I saw the quilt of boats at the Houston Show too - thought it was amazing - you are lucky to have the quilt shop - I wish we had one actually close by and not 85 miles away!

I love Cynthia’s quilts, and have two of her patterns. One is just the pattern and the other is a kit. I also bought her book, years ago, but have never had the time, or the ability to try and transfer her techniques in the book into actually doing it.

I have to agree with you - if I could cut out sleeping, I'd get so much quilting done!
Those landscape kits look amazing. You'll have to let us know how yours turns out.

I've always admired landscape quilts but just don't have the patience to make them...I'm all about the chain piecing and getting to see the finished product!

Must investigate that little iron...It's difficult with a wonky knee to get up all the time and walk to the iron...that little iron would solve a lot of my problem. Well, and once I get the knee replaced, that will help, too.

ok.... what is the make and modal of the little iron?