These photos should clear up why I haven't been blogging much.

On June 25th I took this photo of 12 tons of rock that was delivered to our home. It was a mixture of boulders about 18" square on down to rocks the size of a fist. It is fractured granite which is abundant in our area. 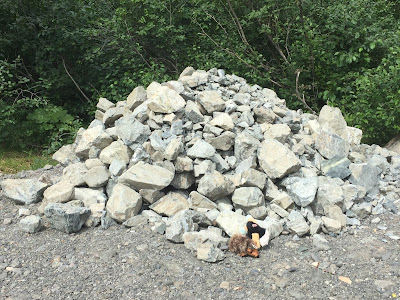 Same spot on September 19th.
I moved every piece. Sometimes I rolled the biggest pieces to where I needed them or used a furniture dolly. I moved 24,000 pounds of rock. I had a vision! 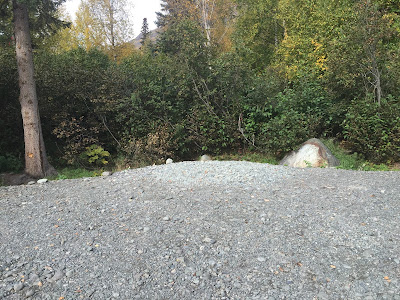 One of the easiest areas was adding a rock border around the planters on the front of my house. I have some ideas about how to create a walkway in front of my porch steps which involved getting a load of gravel delivered a few days ago...you can see the edge of that pile on the right side of the photo frame. Hopefully before the snow arrives I will have tackled this area. 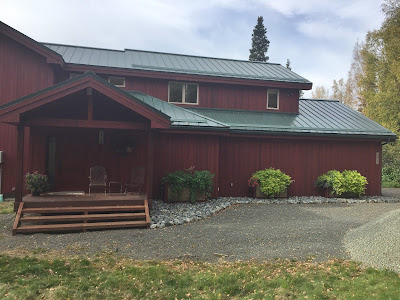 But most of my time was spent on the back side of the house. 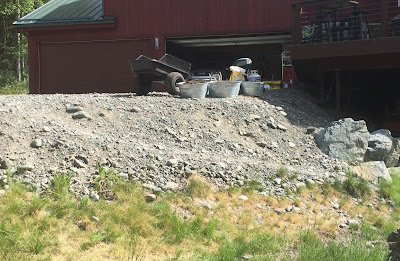 I made a pano photo so it is a little distorted. Underneath the deck is the dog run that is off my sewing room. We bought two metal dog kennel kits from Costco and used the premade metal fence panels to enclose the area underneath our main deck. The kits each came with a gate so we have one on each outer side of the kennel. The metal panels are secured to the house walls and deck posts. Extremely sturdy! To have a fencing company make this arrangement would have cost several thousand dollars. Each kennel kit was just under $500 so we feel like we got a deal. And it looks so nice.

We had the kennel set up years ago but it did need some more gravel to fill it level with my other additions. A second huge pile of gravel sits on the backside of the house for that half of the yard. Kinley was with me for every minute of my landscaping work...great moral support. 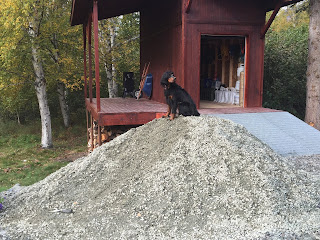 A few more detail photos...the rock wasn't washed off in these photos...it had a nice layer of dirt.

First my wall of metal tub planters. The plants have grown so much this summer. I sure hope they make it through the winter in this design...big experiment!!! 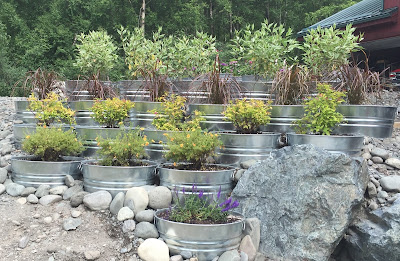 Boulders filled in on the right side by me...and wooden stair frame constructed on the left side by my handyman. My husband filled the bottom five steps with cement which I really don't like. I filled the top five with gravel. (I told him to stop after he filled the first step on the bottom but he was determined to use all five bags of cement that he had purchased.) I guess I don't work well with others sometimes so that is really why I did all this rock moving by myself. 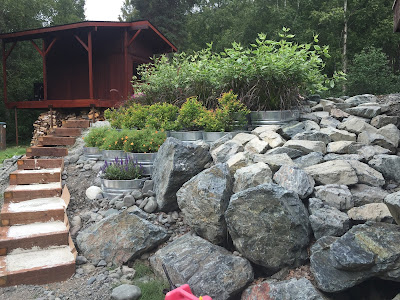 Boulders added on the downside of the stairs... 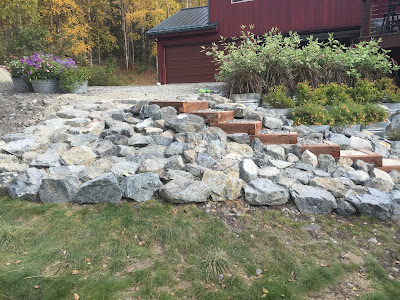 Rock filled in around the tubs and stairs. 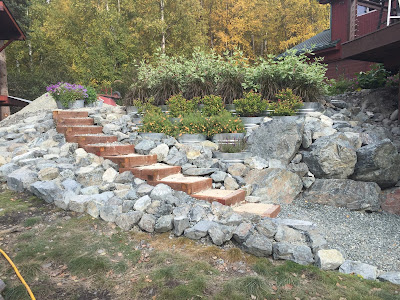 A better shot of the kennel area. 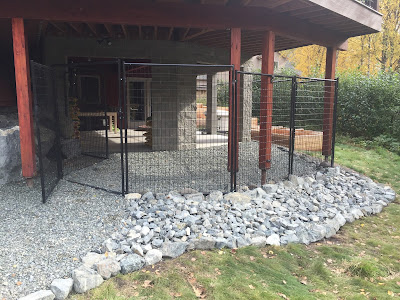 And a huge project ahead of me...filling my tiered raised garden beds. I had my handyman make these beds also. I am going to use the hugelkulture method. Layer of cardboard...then logs...then limbs and debris like all the leaves falling off the trees. I don't think I'll add the final layer of garden soil until next spring. More details as I tackle that area. 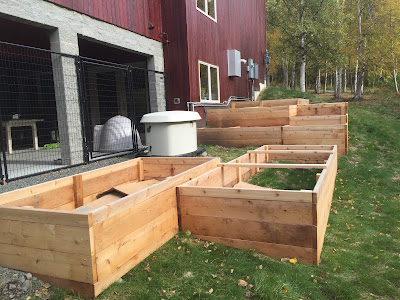 And finally...one of my most proud moments as a mom...my son Zack was sworn into the Air Force recently. He has been selected to become an F-15 pilot with the California Air National Guard in Fresno. He has about 2 1/2 years ahead of him to get through all of his military schools and pilot training. He is pictured with one of his mentors who has guided him through the process of applying for pilot positions at Air National Guard units on the west coast. We are waiting to hear when he will leave for his first school. 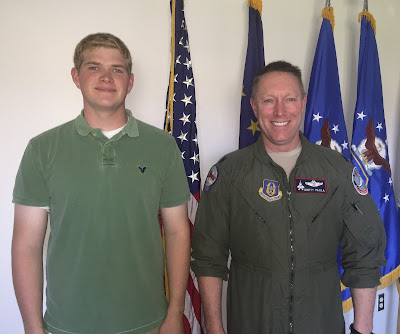 Another load of boulders was delivered yesterday...this time 13 tons. Not sure I'll get that in place before the snow hits but it will be waiting for me when the snow melts next spring.
Posted by Debbie at 3:30 PM 9 comments:

Once again a month has zipped by...as I get ready for September's Breakfast Club, I realize I never posted photos of August's Breakfast Club. Here are all the wonderful projects everyone shared at our last gathering.

This is a Finding Dory quilt made from the pattern, "Sidelights." 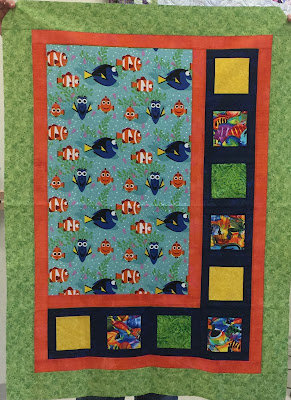 I believe the pattern for this quilt was "Yellowbrick Road." The borders make use a of a directional print fabric. 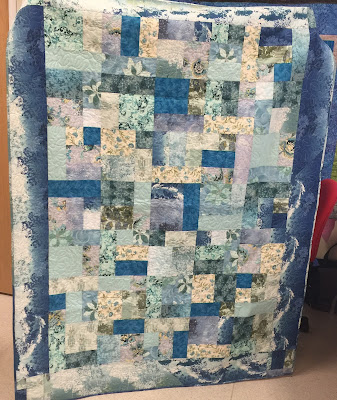 This was a Hunter's Star pattern from the Missouri Star Quilt Company. 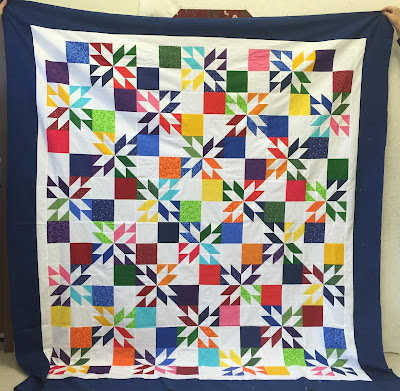 I've tried like crazy to find the name of this pattern...no luck. The fabric panel of horses is called North American Wildlife Horses from Robert Kaufman fabrics. 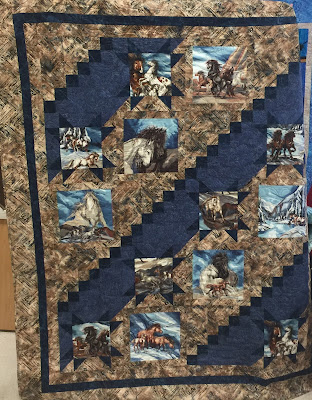 This is "Bloom," the pattern from our July Breakfast Club meeting. 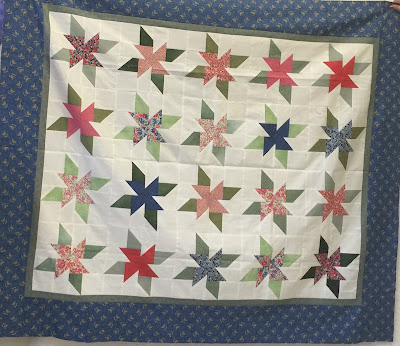 The backing Jackie made from the leftover blocks. 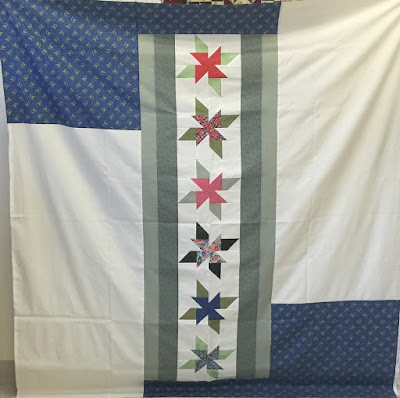 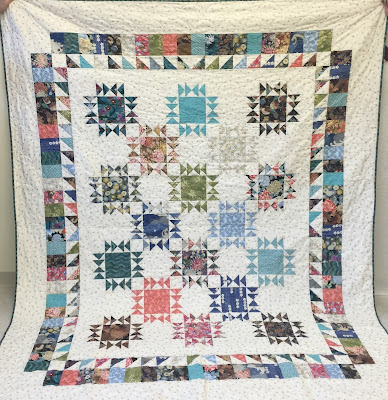 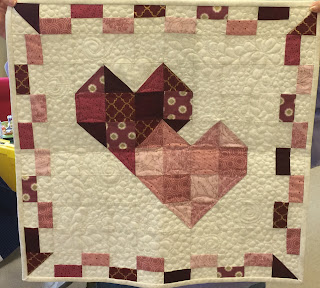 This is a seasonal quilt club kit our host shop started recently.

This is Joyce's version of a strip club pattern, "Little Boxes." 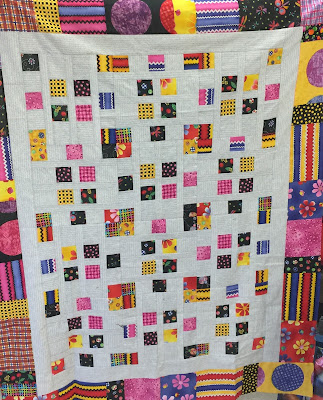 Marcia's "Bloom," quilt just back from the quilters...needing its binding. 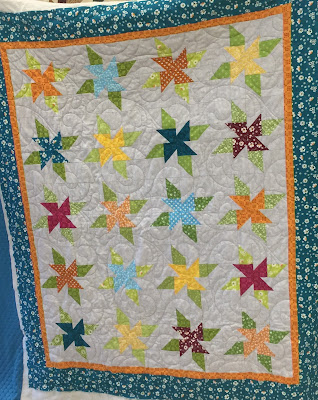 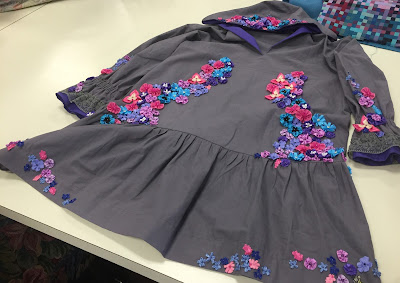 Kuspucks are a traditional Eskimo women's over dress. Really considered a summer parka. They are usually worn as a type of pullover jacket. Very roomy for easy movement with a layer of clothing worn underneath like turtleneck and jeans. Our Breakfast Club gathering had a great time seeing this seamstress's designs. Beautiful!!! 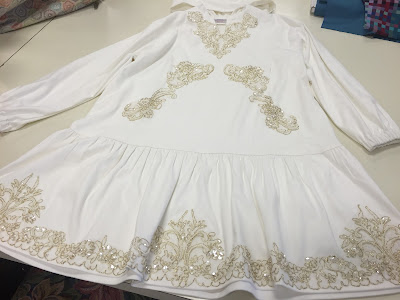 And my version of, "Bloom." 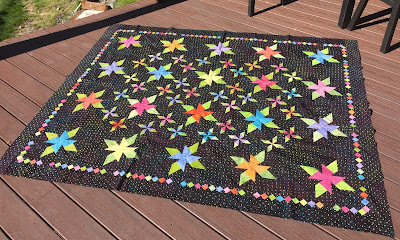 Now I need to spend some time figuring out what project I am going to work on this Thursday for September's Breakfast Club. Can't believe a month has slipped by so quickly.