Tropical Colors for a Winter Day

Every day the suns gets a little higher in the sky. I took this photo on Friday, January 26th at 12:38 p.m. It will be fun to try and check the sun's location in a few days. Today there was bright sunshine standing in the same spot...just one day later.

I am still unpacking from our Kauai trip. I bought a stack of Robert Kaufman tropical batiks.
which got soaked in hot water for a couple of days so now they are ready to be ironed. 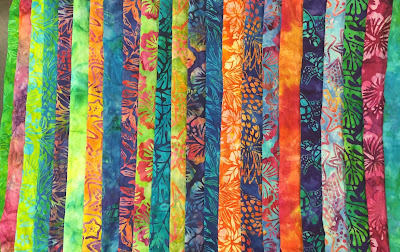 I also picked up this pattern, "Gimme Diamonds," which I saw made up two years ago in one of the Kauai quilt shops, Vicki's Fabrics. You probably aren't surprised to hear that I have several stacks of thematic fat quarters that would look great in this pattern...big prints that I don't want to cut into little pieces. I have a quilt retreat coming up in a couple of weeks and this will be a fun project to take. 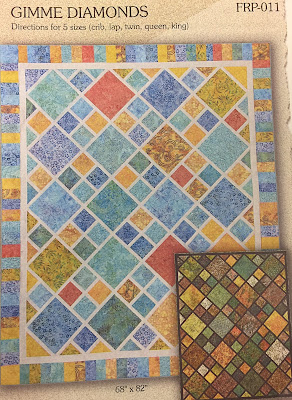 Before we left for Kauai, I ordered a 2017 hardcover, printed book of my blog posts. If you get on the mailing list with Blog 2 Print and wait for a coupon code you can get a pretty good deal.

There are many options for cover designs but I usually pick something very simple.
You can select a front and back cover photo. 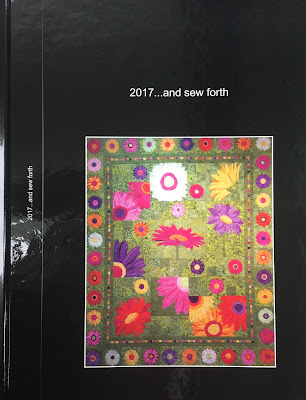 So fun to put this photo of my cat on the back cover. He just barely fits in the top bed of his cat tower. I think I am going to have to custom design a new cat tower...Maine Coon sized! 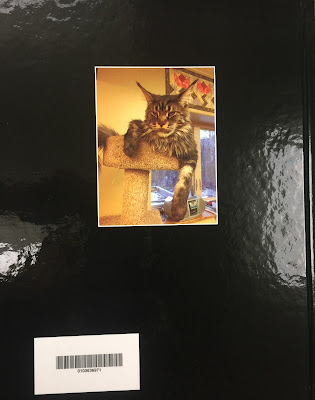 I need to go back and publish earlier years. This is the third year I've published a book. My 2017 book is just over 100 pages long and cost $37.00. I had a great discount offer of 35% off that brought the price down a nice chunk. 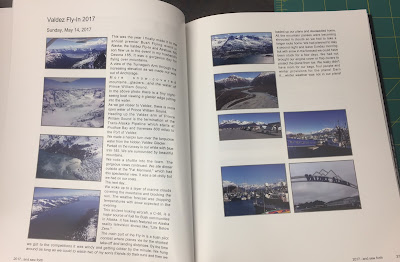 I keep trying to spend some time on the computer working with EQ 8. There is a new way to import fabric images so the size of the design is kept in proportion. My pets keep sabotaging me when I sit down to work. Usually it is the dogs wanting to go outside. But yesterday Eli just didn't want to let me work on my computer. 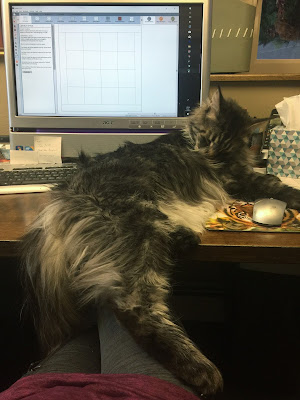 My Material Girls quilt group has a panel challenge we need to have finished by early May. It took me months to select this set of Hoffman layercakes printed to mimic Hawaiian applique. I would really like to preview a couple of design ideas on EQ though I did find a free pattern on the Hoffman website that might be one I can adapt to my needs. Again...working it up in EQ would be nice but I'm getting a little worried...I expect the quilting to take a great deal of time too! I can't discuss all my ideas as I think it is supposed to be a surprising reveal. 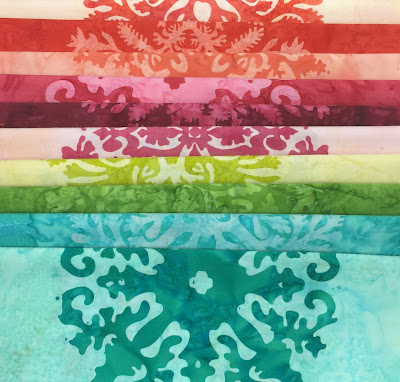 I did finish the last Santa in the Pirate Santa set, Jamaica Santa. 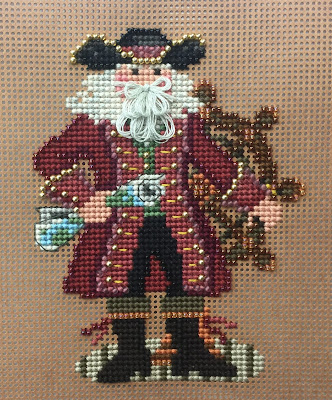 The animals are all sleeping.
Hope I can spend some more time on the computer before they get stir crazy.

Thank goodness this is not how our vacation on Kauai started but we were there for this bit of drama. 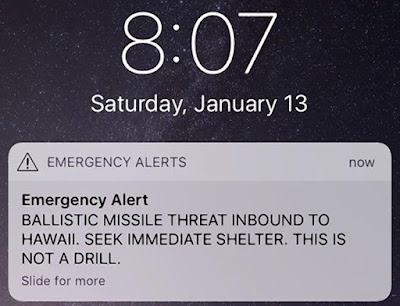 I hadn't even had a cup of coffee yet when our cell phones started squawking this message. My husband was walking on the beach and I was in our rental house wondering just what I should do. I read the message several times.

All four sides of the exterior walls of our rental house were huge glass picture windows. Not even close to being a place to seek shelter. I thought it was odd that the sirens installed all over the island for tsunamis were not going off...and it was so quiet and peaceful at our rental house I just couldn't believe a nuclear weapon was inbound. So the next thing I did was google it! And I found a couple of twitter messages from folks who had called the civil defense authorities who said it was a false alarm. That satisfied me. I went back to making my coffee and waited for my husband to return.

It was a different scene at ground zero on Oahu. How terribly frightening for so many people. It was ridiculous how long it took for an all-clear message to be released. I even checked all the local television stations and they were scrolling the missile alert  message for at least 15 minutes.

National emergency over...time to get back to living the good life! 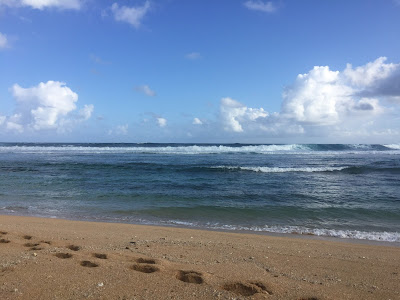 We rented a home through VRBO on the north shore of Kauai, in an almost non existent town called Haena. Not beach front but a very short walk to the sandy shore.

We had a mountain view. Perfect for a couple that is used to living on a mountainside. 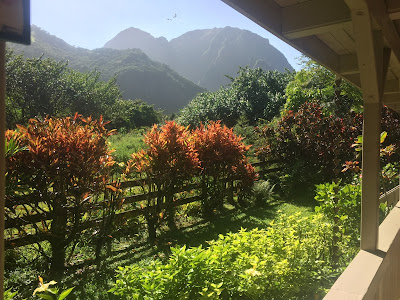 The back edge of the property backs up to an agricultural tract.

We had a few cows to watch for just a few minutes now and then as they rambled past our lanai. 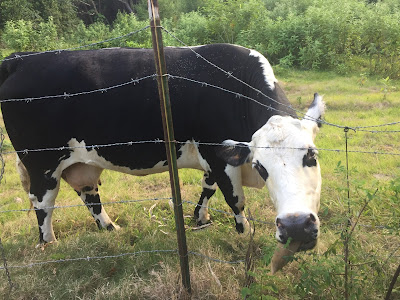 When we weren't at the beach, I spent all of my daylight hours on our completely secluded lanai, stitching and listening to audible books.

It took me about 10 days to get a little tired of that routine and anxious to get back home. 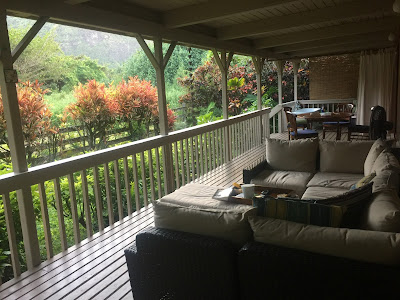 We were on Kauai for 14 days and the last three were pretty wet.
I got a lot of projects done and was a bit worried I might run out of projects to keep me busy.
Here is what I got done. 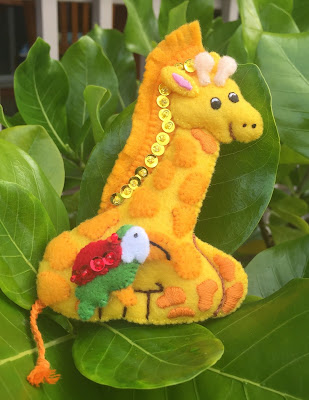 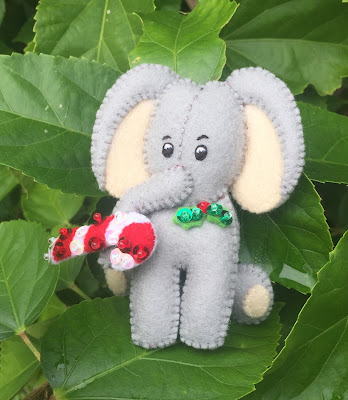 A lion ornament.
So nice to have some pretty green leaves for my photos. 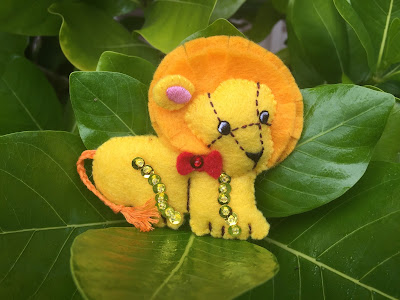 I really made great progress on my set of 2017 Pirate Santas. 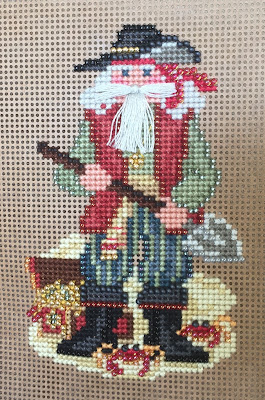 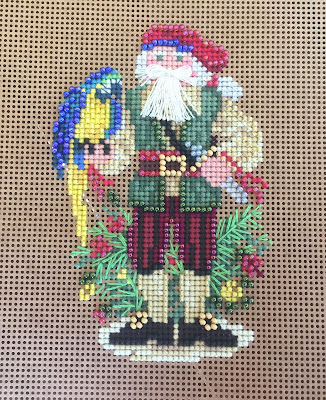 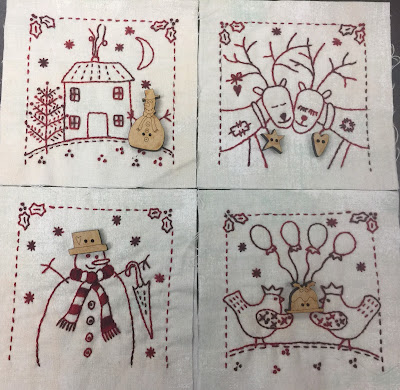 I also took a laptop computer so I could start learning the new EQ 8 program but I should have just left that at home. I read my emails in the morning and that was about all I did with that silly computer. As it should be when on a vacation.

Our first night home, sleeping in our own beds, we were welcomed back to Alaska with the biggest earthquake in the state since we moved here. At our home, the quake was just a constant, gentle shaking that is only memorable because it lasted for so long.

The map below indicates the "shake zone."
We were on the outer ring.
On the edge of another disaster. 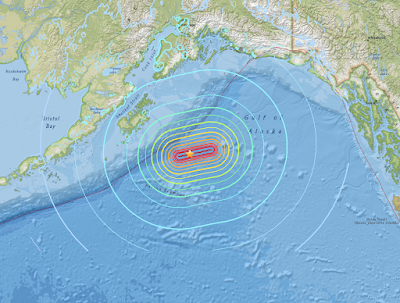