A Little of Everything

We finished our tourist trip with a couple of days in Whittier. We did a glacier tour of Prince William Sound. Below is a photo of Surprise Glacier. The glacier does a lot of calving so that is how it got its name and it did give us a nice little show. 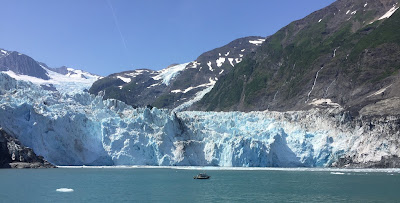 The next day we went on a halibut fishing charter with Crazy Rays. There were 12 of us on the boat and 11 of us brought home a halibut. I was the last one to get mine and it was a biggie, 90 to 100 pounds. 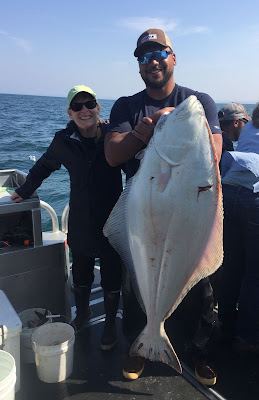 No way could I pick up this sucker. The boat had rod holders but I still needed my husband to hold the rod in place while I used both hands to reel. The fish was 400 feet below the boat. It took forever to reel it in...it was much more difficult than I thought it would be. 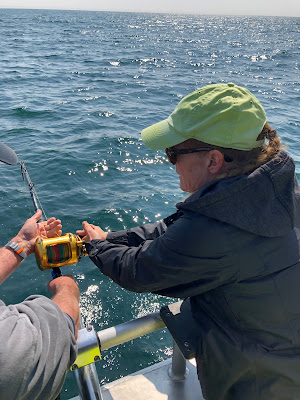 We have been breaking a lot of records for high temperatures this summer. It has been a real chore to keep everything watered. I did some artichokes as ornamental plants in pots. They are doing great. 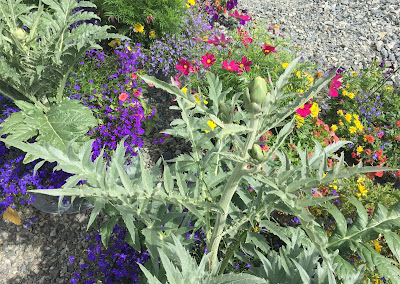 My garden is out of control but in a good way! 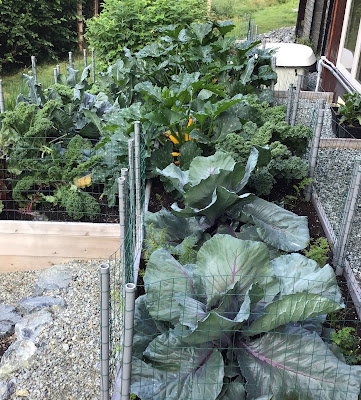 Not sure if I will do zucchini and yellow squash again. The plants get so big and my husband doesn't care for them. 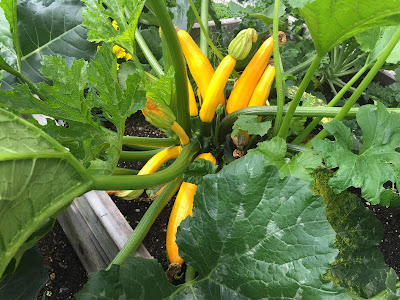 Harvested a batch of squashes and some beets.
We had zucchini noodles with our marinara sauce last night. I liked it more than hubby. 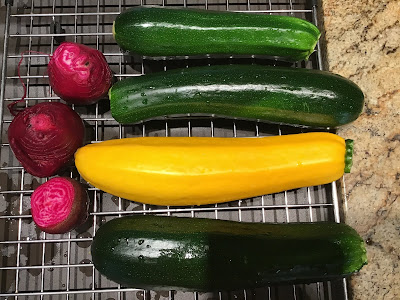 Tonight I am making a salad that has some spiral zucchini in it.
I know hubby likes zucchini in that recipe. 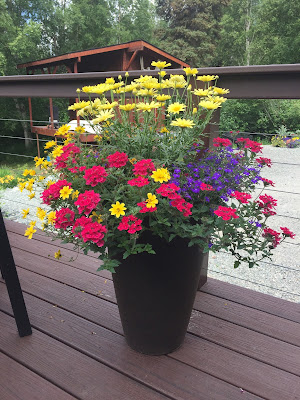 I could share of ton beautiful flower pictures...they all look so great this summer.

Despite all the wonderful hot and sunny weather, I have spent time on some handwork pieces. 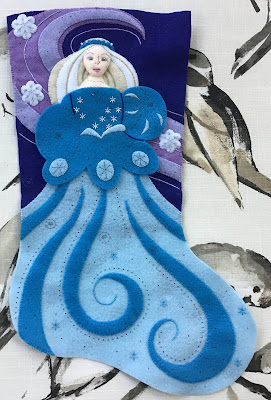 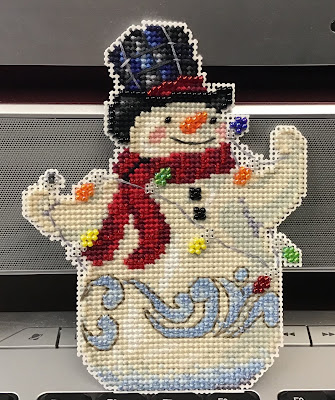 Added the border to the second quilt top, "Spumoni Spin." 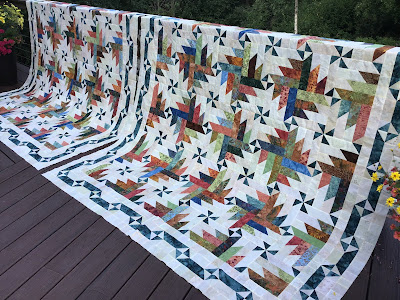 And I got a few of my older Bucilla stockings lined with cotton Christmas fabrics. I learned this technique through a Bucilla Facebook group. This extra lining process really adds nice body to the finished stocking. 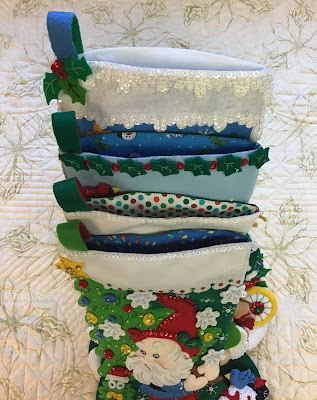 It is always good to write a blog post and see that I really have gotten some projects done.
Posted by Debbie at 8:28 AM 6 comments:

It is fun to be a tourist in our home state of Alaska.
My husband came up with a full itinerary when friends from Texas
scheduled their vacation with us last winter.

Hubby is a commercial airline pilot but he also has two small airplanes.
Our first adventure was only accessible via a float plane so good thing we have one of those. 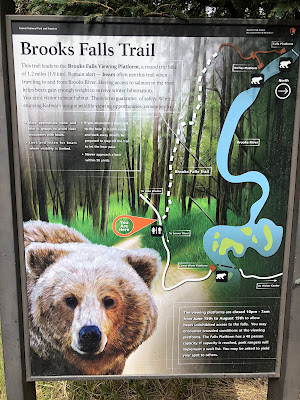 We went to Brooks Falls in the Katmai National Park and Preserve.
We were on the early side of the season for major numbers of bears fishing at the falls but we saw
25 different bears throughout our day.

There are a series of raised walking paths and viewing platforms as you make your way to the main platform at the falls. It seemed like every step we took brought a bear into view. Here is a sow with her two-year-old set of three cubs. 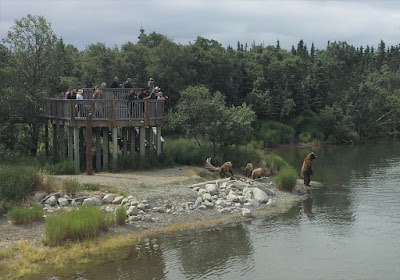 A bit of a better view when we got to the first platform. 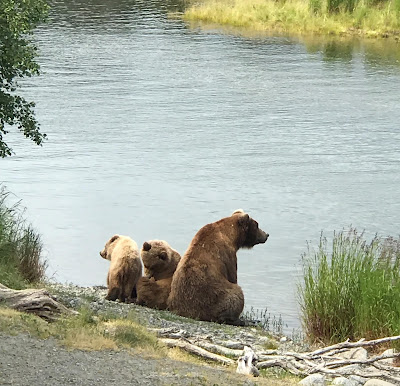 There were parts of the walk through ground level wooded areas which was very unnerving to me. We saw this sow with her cubs taking a nap within 10 feet of the main trail. Yipes...I couldn't believe Mama Bear didn't rip our heads off but she was fine with all the traffic. There were no barriers protecting people from the trails bears use to walk around the area.  Park rangers where sometimes present to keep people quiet and moving. I felt extremely vulnerable. 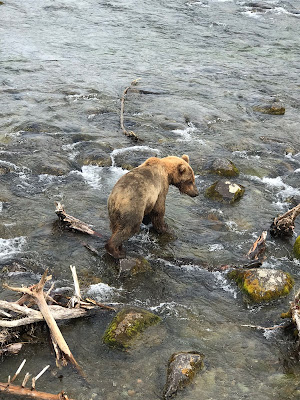 Step one was to rip all the skin off the salmon.
The bears all ate the skin and then left the rest of the salmon for the birds. 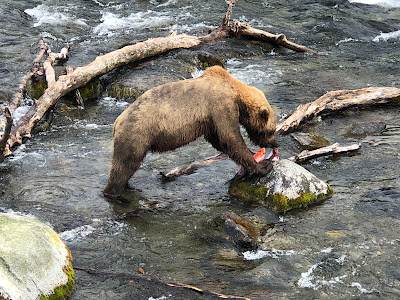 Below, this young bear was so entertaining. He ran all over the area. 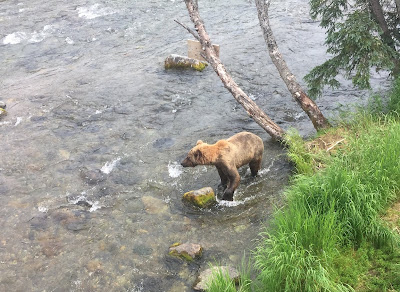 We saw him again when we finally made it to the platform at the falls. 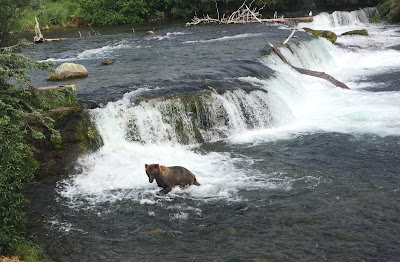 Right at the base of the falls were these two large bears who knew right where to sit and catch salmon without moving much. 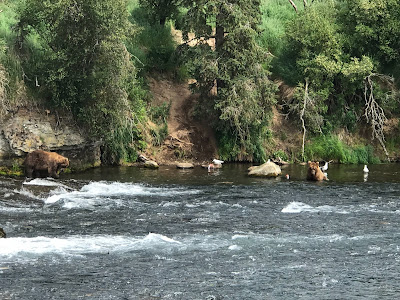 We waited an hour-and-a-half for our turn on the main viewing platform and then had 30 minutes to hang there. We left after about 15 minutes as the action seemed to hit a lull.

But there was lots of action as we walked back to the main park ranger camp.  There were eight of us on the trail when we went around a bend in the path and saw a young male bear walking toward us. We tried walking into the woods off the trail but he started to follow us.

No park ranger in sight, We did have a canister of bear spray.
The bear wasn't aggressive but he was more than just curious.

So we raised our hands and started saying forcefully that the bear should leave. We didn't yell but spoke confidently. The bear watched us for a while (which seemed like an eternity), then turned and walked into the woods.

On of my sons worked for a float plane operation out of Anchorage for two summers and he warned us this happens pretty often. The park rangers try to give the bears time to move on their schedule...not people schedules. 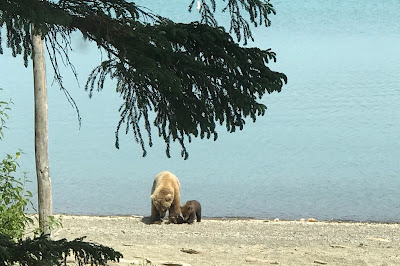 When the Mama Bear finally decided to leave the beach she headed directly toward us. We were right outside the visitors' center. We went inside to wait for her next move. She sat right outside one of the center's windows. The screen makes the photo a little odd but that's how close she was. 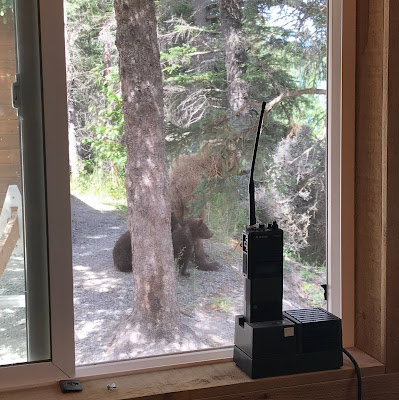 From there she headed back to the beach and finally went far enough away for us to get to the airplane and leave quickly.

It is a very full day to fly back and forth from Anchorage to Brooks Fall so we spent two nights at Port Alsworth in first class accommodations, Wilder B & B. Really, it was half of a duplex we had to ourselves with a full kitchen stocked with breakfast making options. We even had WiFi...amazing. There is only cell phone reception for Verizon due to a local communications company that has a monopoly on the wilderness areas of Alaska. No AT&T  service which is what all of us on the trip had. We did carry a satellite phone which is a great safety tool to have when flying around the state.

There are no grocery stores of restaurants in Port Alsworth. There is a coffee stand where you buy aviation fuel. We packed in all our food and took advantage of the excellent propane grill at the B&B. 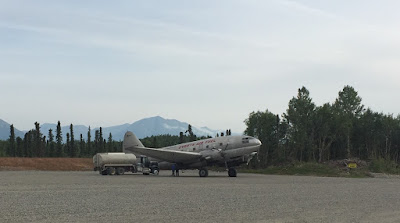 Our cabin sat on the edge of a large gravel runway. All the fuel for this town must be flown in as there is not a road, railway or water access for shipping. We watched the Everts fuel airplane landing the morning we left. This plane has been on several reality tv shows that feature living in Alaska. 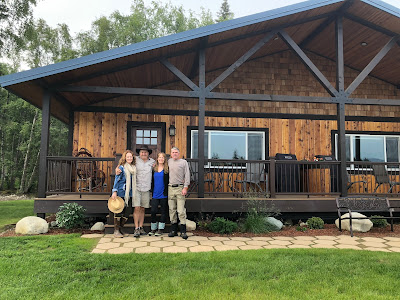 Time to leave our sweet cabin. 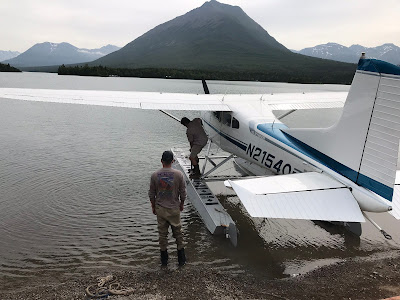 This is our Cessna 185 that took us on our grand adventure. Prepping it to take off for Anchorage and our next adventures that will also be on the water.

You can view the bears at the falls live via this Bear Cam link.
Posted by Debbie at 1:30 PM 7 comments: