Last Thursday we had a great number of quilts at our show and tell. I will post more pictures in the next day or two. It is always fun to see the many different versions of quilts we have made in Breakfast Club.

In August we made the pattern, "Speedwell," from Moda's Bakeshop.
Click here for the link to the pattern 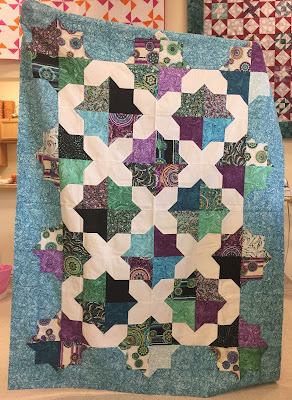 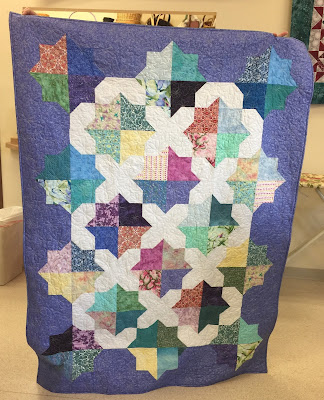 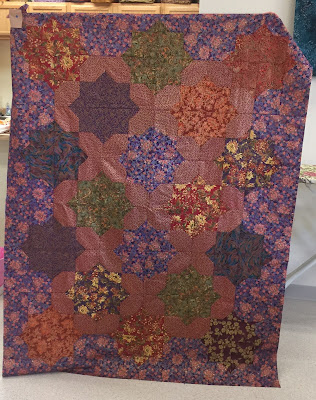 This is a pattern we all agreed we could see ourselves making again. 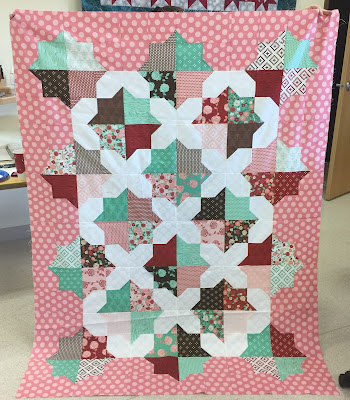 My version...on the design wall. I was thinking about adding a border or two with the leftover half square triangles but just not so sure... 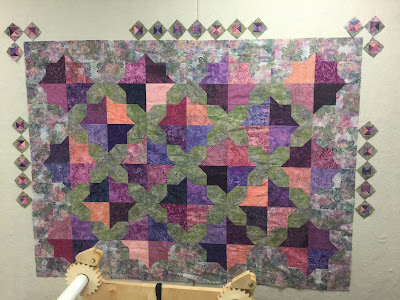 The weather guessers were right...we did get snow last week, six inches by Friday afternoon. A little bit of it has melted but our temperatures have dropped into the teens so not loosing anymore snow for a few days.

Kinley and I went for a nice walk up the mountain. She got a pretty new pink harness.
She does love the snow! 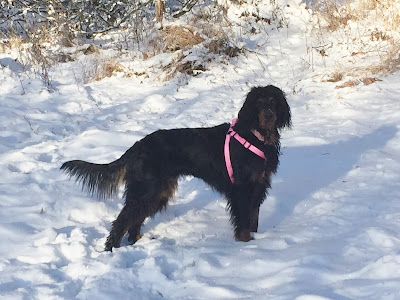 Our destination was a waterfall. Lots of icicles hanging from tree branches and rock edges. 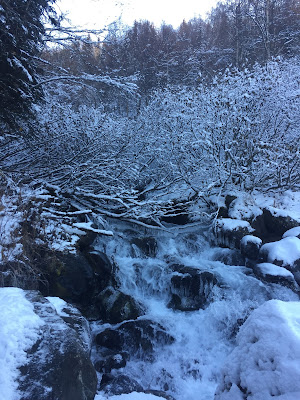 The view from our deck...

Kinley is taking her afternoon nap and I also played with Eli so he is taking a nap. I am going to try and cut my pieces for the quilt we are making at Breakfast Club this Thursday.

I will be going to the Houston Quilt show this year...almost time for that trip. Then, after Thanksgiving I will be flying to Wisconsin to pick up our new puppy. So much fun stuff to look forward to the next few weeks.
Posted by Debbie at 1:11 PM 5 comments:

It surprises me to see it has been ten days since my last day of rest from my landscaping projects. I am pretty much done for the season. The ground is frozen so about all I can do is move rocks.

The big reveal.
Rock slope completed to the shed.
Flower bed outlined.
The fire pit is our current favorite spot.
We've been enjoying it for a little happy hour.

Love that pano setting on my iPhone camera.

My new rock slope looks like a pretty nice place for taking quilt photos...didn't even think of that until today when I wanted to get a quilt photo in some sunlight. I love this quilt. I wasn't sure if the leaves would pop when I was quilting them. I'm very pleased they are prominent. 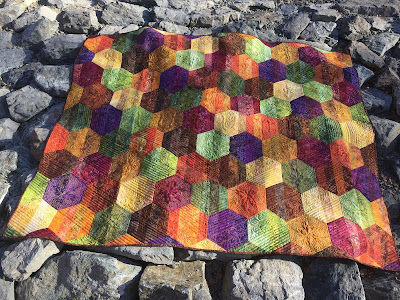 It took me many months but I did finish a Bucilla kit project. 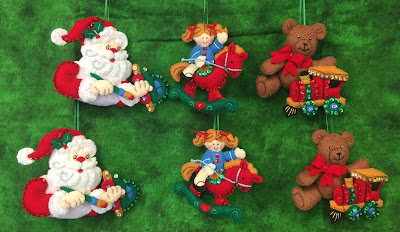 I've started playing with the next quilt top that needs to go on the quilting frame. Mr. Eli is always right in whatever project I am tackling. He will be six months old at the end of October. I just scheduled his neutering for next week...sorry big guy. 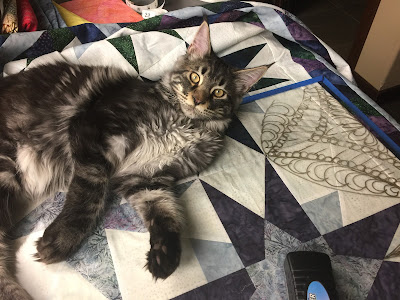 A Day of Rest

Sunny but slightly chilly weather has meant most of my time has been spent outside working on my landscaping projects. I have some pictures of that stuff later in this post. But...it's a bit more fun to talk about some of my quilting and needle work projects. This was the quilt I was able to take to Breakfast Club last month for show and tell. I love how it turned out but I'm not doing a "final" photo shoot and presentation until I get the binding finished.

Like a typical cat, Eli thinks everything is his. Only 5 months old and his is soooo big.

Here's a block detail...I threw in a few leaves. This one came out particularly nice. 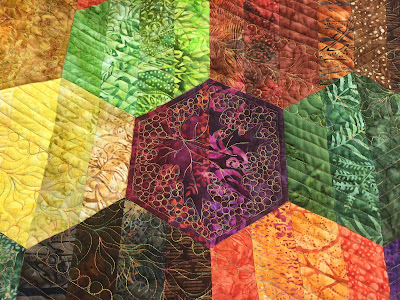 This was the project I worked on at Breakfast Club...a kit I picked up at a good price on eBay. I had seen this pattern and wanted to tryout this technique of sewing an unattached triangle that is pulled back and stitched down to create a curve. Very simple and a quick one to make. The pattern is, "Mexican Stars," by Southwind Designs. It is going to be fun to quilt! 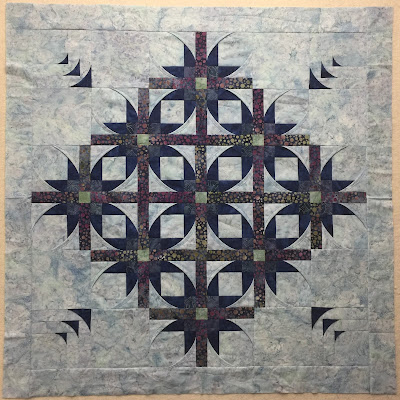 I'm trying to get back in the habit of working on my Bucilla projects at night. These bears need a toy train to complete their ornament status. 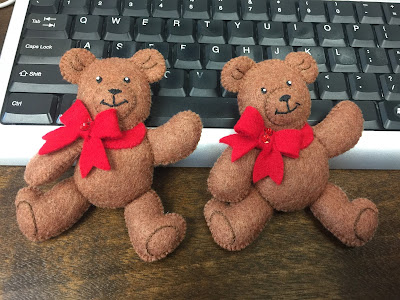 And I finished the last Santa in the Jim Shore series, Early Morning Santa, with the rooster. 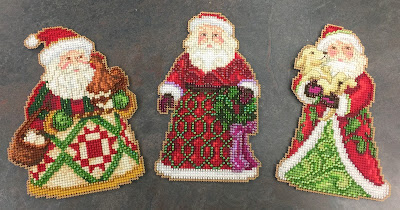 Back to the landscaping progress. I had two more loads of rock delivered since my last post. The one on the right only has about a quarter of the original amount left to move...but I needed big rocks so had to get another load before I was finished with the last load. 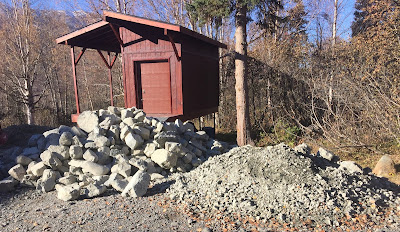 This looks so deceptively small in this photo but I added a rock border to the other side of the house front. I have so many more plans for this area...just don't know if anything else will happen this season. 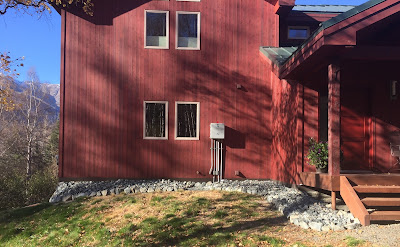 My all-consuming project has been our fire pit. My husband set the steel ring in a few years ago but really didn't do much else. We were sitting to far away to feel the heat so I made the painful decision to dig out a sunken seating area and line it with rock. I have spent at least two weeks on this project and have gotten enough done to enjoy the area as long as the weather holds. 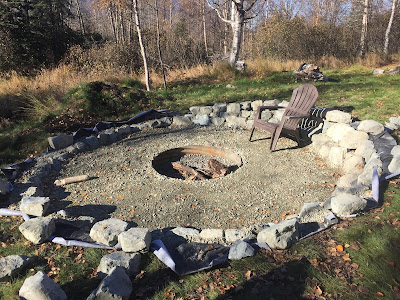 I've got three other areas in the yard at various stages of progress but not enough to show that is interesting. It certainly keeps me busy and I have definitely toned up more since taking on these projects...my jeans are a little looser!
Posted by Debbie at 4:33 PM 4 comments: